Extradition has developed into an area of law that requires dedicated, detailed and specialist advice. It is a field of fast growth in terms of the number of cases and the jurisprudence it generates. We have been part of that legal development recognised as a leading firm responsible for changes the 2003 Extradition Act and in setting guideline cases in so many aspects of the act.

We have extensive experience of representing clients at the Magistrates’ Court and on appeal to the High Court.

While we lead the way, we do not forget that our clients are real people with real needs. The effect of extradition can be overwhelming and we strive to assist our clients during a very difficult time. We recognise the importance of communicating with families and seeking assistance from lawyers outside the jurisdiction, where appropriate. We protect our clients’ rights throughout the process.

Our strength lies in using many tactics to achieve our client’s overall strategy depending on their needs and circumstances. This can include negotiation with the Requesting State, challenging the validity of the extradition warrant, and working to have the warrant withdrawn by the Requesting State. Our involvement in complex human trafficking cases has allowed us to fight for EU and British nationals alike.

In terms of challenging the extradition warrant in the Extradition Court, we have vast experience of mounting arguments based on procedural failures, the Human Rights Act 1998 and the European Convention on Human Rights.

We of course recognise that some of our clients simply wish to return to the Requesting State. We are able to assist with this transfer by ensuring our clients have advice, knowledge and information regarding the procedure for their return.

In general crime we use our expertise with inbound extraditions to the UK ensuring that any such extraditee is protected under the rules of specialty and that any time served in for example Part 1 jurisdictions is counted when a court passes sentence. 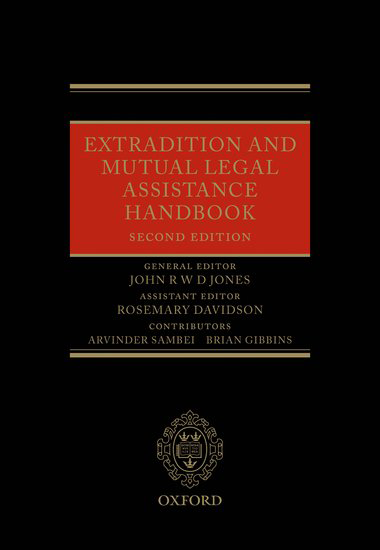 The head of the extradition department, Fadi Daoud contributed to a leading publication on Extradition Law:

We have been head of the field, responsible for many of the leading cases. One of our cases has even led to a change in Primary Legislation having highlighted a hole in the original drafting of the Extradition Act 2003

The Governor of HMP Wandsworth v Antana Kinderis, TPGO of the Republic of Lithuania, CPS, Cambridge and Interested Parties: The City of Westminster Magistrates Court, SOCA & the SoS for the Home Department [2007] EWHC 998 (Admin).

You can see the full judgment on Kinderis by clicking on the link.

Other Cases of Interest

Following that success, Benjamin Waidhofer, was further instructed to conduct the subsequent forfeiture proceedings.  At the conclusion of those proceedings, the Court (having previously ordered that the full security be forfeit) ordered the return of 50% of that security together with 50% of Ms Spencer’s costs.

On 27 and 28 May 2015, at Westminster Magistrates’ Court, District Judge Zani ordered the extradition of Patrick Spiteri to Malta.  Mr Spiteri had, earlier in the proceedings, been released on conditional bail.  Ms Spencer, his mother-in-law, stood as a security for him and deposited £70,000 with the court. He subsequently failed to surrender to police custody when required to do so.

On 5 August 2016, Ms Spencer sought the return of her security.  At first instance, the District Judge ordered the Ms Spencer to forfeit the entire £70,000 deposited at court.

On appeal, the decision of the District Judge was quashed.

On 29 June 2018, the District Judge, having re-heard the original application, ordered Ms Spencer to forfeit 50% of her security (amounting to £35,000) and further reduced the amount which should be forfeited in light of the costs Ms Spencer had incurred contesting the matter at the magistrates’ court.

The obligations upon sureties and securities are onerous.  Members of chambers are often instructed to advise individuals of those obligations in both criminal and extradition proceedings.

Lopetas v Minister of Justice for Lithuania [2007] EWHC 2407 (Admin).  This case highlights how important it is that cases are run well right from the start: at the Magistrates’ Court.  Basic initial hearing arguments must be put as soon as they arise.  These can be seen and pursued when the advocate is experienced enough to do so.

Fadi founded the Extradition Department. The Department has been at the forefront of some of the leading cases in Extradition Law. Fadi is an experienced advocate and also practises Criminal Cases of a more serious or complex nature.

Natalia is a Polish speaker specialising in Extradition with extensive experience in part 1 and 2 cases. She is exceptional in her percentage success both at first instance & appeals with her cases covering modern day slavery, art 8 (right to family life), s2 (lacking particulars) and s14 EA 2003 delayed requests. Her ability to compromise warrants & liaise with foreign & domestic Judicial Authorities gives our clients an overall service whether legally aided or private.